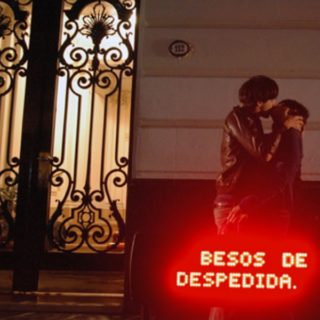 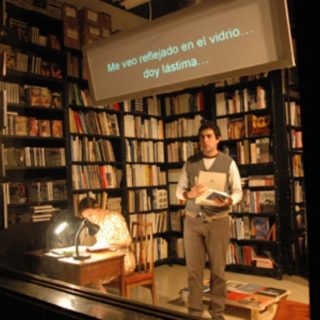 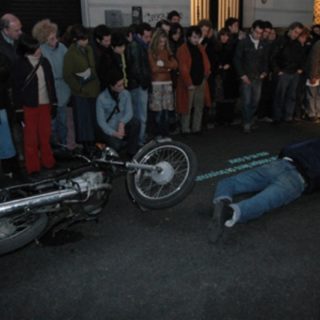 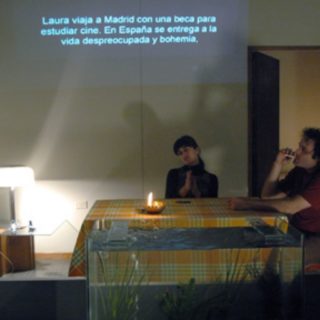 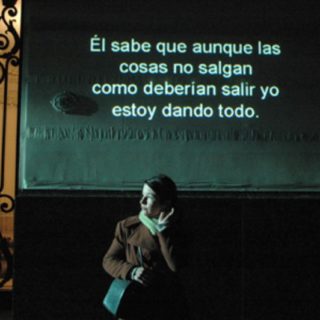 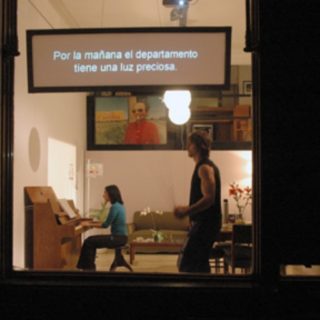 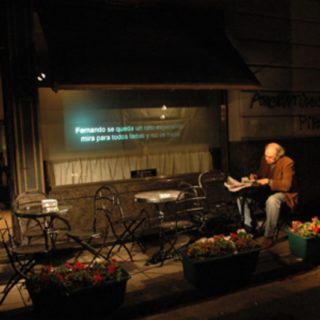 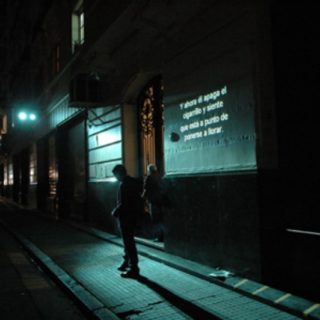 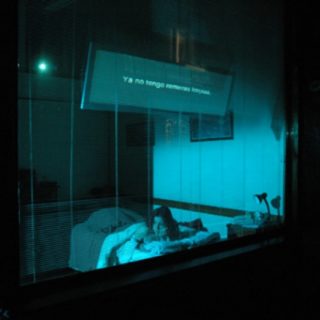 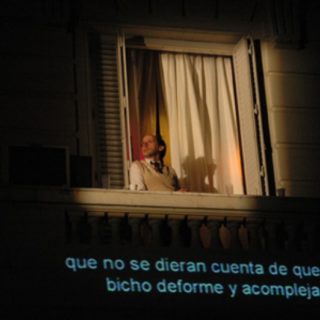 A street at night. Nine private spaces are “invaded” along that street. Each of these spaces contains “installed” actors shown in different situations. Sometimes they are like real people from the neighborhood, other times they are shown in evidently fictitious situations. Without being aware that they are being observed, these characters reveal their habits and do things. Nothing much. These situations either do not have dialogue or if they do, very little is said. However through a subtitling system set up on each of the situations, the audience has access either to what characters are thinking or to the story of their personal journey: their past, their present circumstances, even their future after the moment we see being portrayed. Lots of thoughts, lot of stories.

Of these nine situations, six unfold inside but still visible from the street through windows and three take place in the street. The nine situations are represented simultaneously on both sides of the street and the audience can walk through them, following the flow of the stories and thoughts they have access to; like a tidal wave that allows them to enter an internal dimension of people’s life.

The situations last ten minutes: they start, stop and start again in regular intervals, like a mechanism. Even though each situation has no narrative connection to the others, the tour from one situation to the next can be made in a linear way, consecutively or randomly, in which each person can choose his combination and build his own sense of wholeness.

The starting point is capturing a key moment, a moment in the here and now capable of being performed but opening up the story´s wider dimension, like a 19th century novel that is impossible to portray. As if all the stories contained inside a segment of the city and its habitants could be simultaneously narrated in present, past and future.
The private turned into a public exhibition.

The process is like the action of looking at a stranger in the street or in a public space and wondering what they are thinking, what their story is, what they are doing there, what their future will be… The audience is placed in a subtly voyeuristic position, as it were spying inside somene else´s house. At the same time as the fictional situations are placed in a real context the borderline between fiction and reality started to vanished and that allows the audience to see their streets and their ordinary places in a different way. The idea of making the private public is also emphasised by sound: the sound of each of the invaded spaces are amplified outwards.
The project is designed to take place over four days, at night. It is conceived so that it can be seen by a large audience, including anyone chancing to pass by the street.

The situations taking place along the street:
1- A man has just had a motorbike accident. His body lies close to the motorbike in the middle of the street. Through the subtitles we learn his story up to the moment when the accident happened and also what he is thinking at this precise moment as he hangs between life and death.
2- A woman is trying to get to sleep in a bed. The subtitles allow us access to her thoughts, to the stream of mental associations and reappraisals that take place before falling asleep.
3- A Bar, three different characters there. An old man who travelled around the world, from one Hilton hotel to another, after his wife death; a waitress who receives strange letters from his boyfriend who is in Irak and reads it in her work; a young man who thinks he wants to be like Belmondo while he reads a newspaper.
4- A man is standing on a balcony. A party is in full swing in the room behind him. His thinking about his life.
5- A couple on the verge of splitting up are in their sitting room having dinner seen through their window. The subtitles tell the story of the man’s family from his grandparents to now, sixty years of history to the moment being shown. We also learn how the two of them met, what their relationship was like and why they are on the verge of splitting up. And also what the future holds for each of them after what we see happening now.
6- A man is waiting for a woman who arranged to meet him at a street corner. The subtitles tell us this man’s story, then that of the woman he is waiting for and also their successive thoughts up to that moment.
7- A scene in a bookshop. A young man watches a girl close by. The subtitles enable us to see what he is thinking, what he is imagining he would say if he dared speak to her and how he sees the future they might have together. His imagination is unleashed by the very fact of envisaging the future.
8- A young man works out alongside a young girl playing Schubert on the piano in the sitting room of a house. The subtitles reveal the story of these strange characters and the music that can be heard.
9- A man and a woman walk from one corner of the street to the other. At a given moment they stop and embark on a five-minute long kiss… A camera dolly carrying the subtitling system accompanies the characters as they move along. The subtitles explain that this is their first kiss, which is why they will always remember this moment and this place. We can also read what each of them is thinking as they kiss