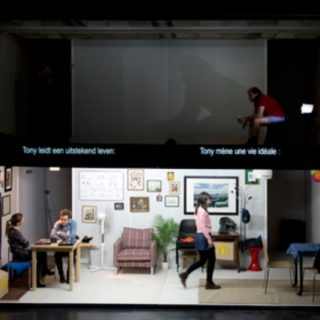 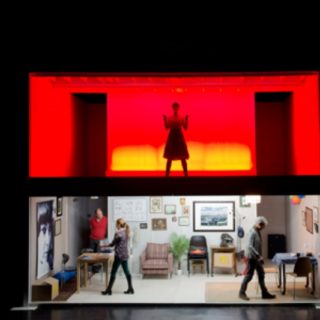 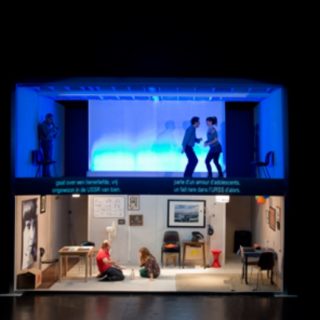 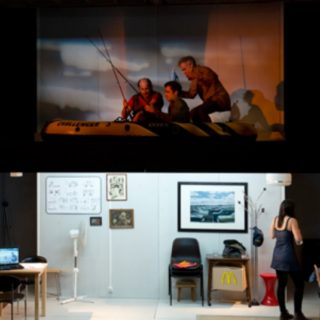 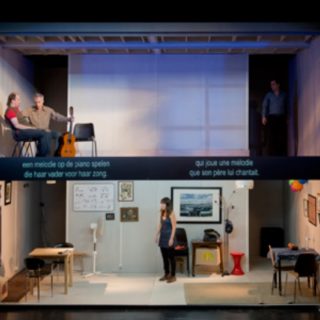 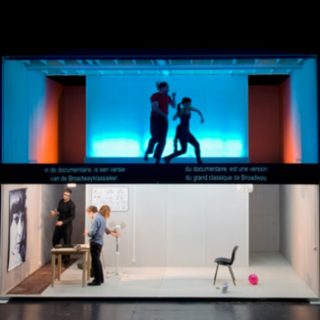 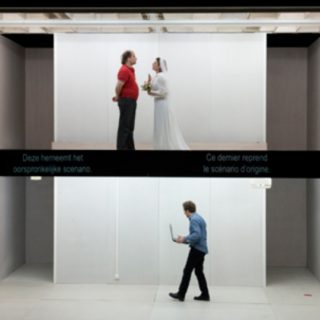 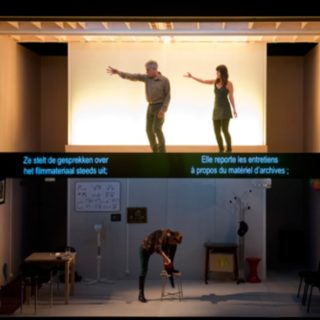 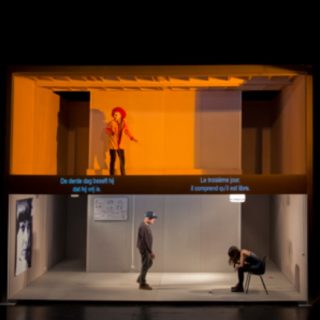 1.
Are works of art time capsules that preserve our ephemeral lives for posterity? Or are
our lives actually the vehicles through which works of art become eternal, making us
repeat the things that we’ve seen in them hundreds of times before? Do our fictions
reflect the world, or is the world a distorted projection of our fictions?

Cineastas revolves around the stories of four filmmakers in Buenos Aires, and the four movies they film over the course of a year in this city. The performance simultaneously shows the personal lives of the filmmakers and the circumstances they find themselves in, as well as the films they are creating. In some cases, the lives of the filmmakers clearly influence their cinematographic work, while in others, quite the opposite, it is the process of creating a film and the development of the fictional plots which transform their private lives.

The work is built upon the tension between the ephemeral and the durable. Cinema
purports to capture a moment and freeze time, while theatre, like life, is an ephemeral
experience in which time flows freely. The contrast between the lives of the filmmakers and their films, works which they hope will last forever, is a permanent presence.

We were interested in exploring a particular facet of the complex relationship between fiction and reality: how do life and day-to- day experiences influence fiction, and above all, in which way has fiction then been the starting point from which our lives are constructed? Cinema, and art in general, as something that forms our personalities: we are what films, books, and television have made us to be.

2.
Three years ago, I started a series of inter views with different filmmakers in Buenos
Aires. I was interested in exploring the ties between their private lives and their films,
focusing especially on what happened to them while they were filming a project, how much of their personal circumstances were present in their work, and what aspects of
their lives were modified through contact with those fictions. Later, I started to interview different people to try to discover how much of their lives had been modelled after the fictions they had consumed over the years. To what extent they reacted to experiences by following patterns they had previously seen in films, for example. This was the starting point for Cineastas. Very little from the original interviews remained in the finalwork, which is completely fictional, since the idea was not to create a documentary, but on the contrary, to explore to the extreme the possibilities of fiction in the construction of a world.

3.
In Cineastas, a pared-down cast of five actors represents and narrates everything, embodying multiple characters. Without the use of filming or video, the actors alone are responsible for embodying not only the lives, but also the films, on stage.
Is there a kind of cinema that is ephemeral? Could something be built in theatre that actually lasts?
With epic effort, the committed actors must breathe life into these questions.

The space in which the performance takes place is an apparatus which simultaneously
presents two scenarios, one for the lives and the other for the fictions, using a classic
cinematic technique, the split screen, which makes it possible to contrast simultaneously occurring events.

Over the past few years, Buenos Aires has become a frequently used location for producing international films. It is a cheap city, and many of its streets are
reminiscent of those of other cities, mostly European, as if the city itself were a fictional reproduction of other, pre-existing locations, locations which in many cases no longer exist in their original cities because of wars or political changes in the past few years. A city that preserves those cities which have disappeared, or a city in which several cities are superimposed, one on top of the other.

The juxtaposition of two ideas, which in turn form a third, was exactly what Eisenstein used for his theory of cinematographic montage. Many of his concepts come from Japanese ideograms, where superimposed images form a third image. According to him, montage is “an idea that emerges from the dialectic collision between two others”. The lives and their fictions also collide, and maybe form a third plane.

In Cineastas, the narration and the representation are in a way disassociated by the
presence of a live narrator, who describes things that aren’t happening on the stage. As if he were a voice-over in a film, the narrator completes the lives of the characters that we see represented on stage, while at the same time, the presence of the idea of narration transforms the narrated events, as well as the narrator. If people’s pasts are built through stories, the present is built on fiction.

4.
Thoughts from some filmmakers:

Only the ephemeral lasts.
Ingmar Bergman

I started with fiction and discovered the real; but behind the real is again fiction.
Jean-Luc Godard

We are what movies told us we should be.
Leonardo Favio